CPRIT Scholar Morrison Elected to the National Academy of Medicine 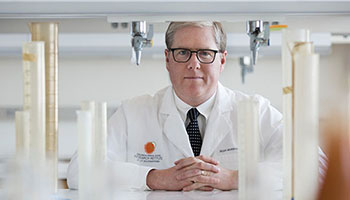 (AUSTIN) – CPRIT Scholar Sean Morrison, Ph.D. of The University of Texas Southwestern Medical Center has been elected to the National Academy of Medicine (NAM). Election to the Academy, considered one of the highest honors in the fields of health and medicine, recognizes individuals who have demonstrated outstanding professional achievement and commitment to service.

“On behalf of CPRIT, we would like to congratulate Dr. Morrison on this well-deserved honor and to recognize the extraordinary research program that he has established in Texas” said CPRIT Chief Scientific Officer Dr. James Willson.

Dr. Morrison, a Professor of Pediatrics at UT Southwestern known for his significant discoveries in stem cell biology and cancer, was recruited to UT Southwestern with a $10 million CPRIT Established Investigator Award in 2011. His laboratory studies the mechanisms that regulate stem cell self-renewal in the hematopoietic and nervous systems and the role these mechanisms play in cancer.

As Director of the Children's Medical Center Research Institute at UT Southwestern, he is building an interdisciplinary group of scientists and physicians who focus on translational biomedical research including three other CPRIT Scholars who he has recruited to Texas: Hao Zhu, MD, Michalis Agathocleous, PhD, and Jian Xu, PhD.

CPRIT investment has established Texas as a national leader in understanding why children develop cancer and discovering more effective ways to prevent and cure childhood cancer. Over 20 percent of CPRIT’s research portfolio goes to childhood cancer research—more than five times the national rate.

About the Cancer Prevention and Research Institute of Texas

To date, CPRIT has awarded $2.15 billion in grants to Texas researchers, institutions and organizations. CPRIT provides funding through its academic research, prevention, and product development research programs. Programs made possible with CPRIT funding have reached Texans from all 254 counties of the state, brought 159 distinguished researchers to Texas, advanced scientific and clinical knowledge, and provided more than 4.7 million life-saving education, training, prevention and early detection services to Texans. Learn more at cprit.texas.gov. Follow CPRIT at twitter.com/CPRITTexas and facebook.com/CPRITTexas.