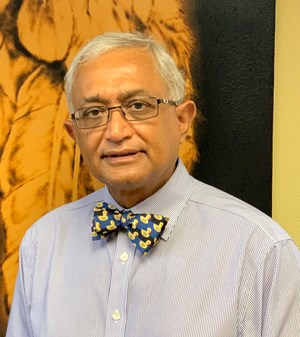 (AUSTIN) Today, Wayne Roberts, CEO of the Cancer Prevention and Research Institute (CPRIT) announced that Speaker of the Texas House of Representatives Dade Phelan reappointed Mahendra C. Patel, M.D., P.A., to the CPRIT Oversight Committee. Dr. Patel has been a member of the Oversight Committee, CPRIT’s governing body that approves grants funded through the agency, since 2018 and currently serves as Presiding Officer.

“Congratulations to Dr. Patel on his reappointment,” said Roberts.  “He is a valuable member of CPRIT’s Oversight Committee. Just last month, in his first meeting as Presiding Officer, Dr. Patel guided the committee in their approval of $38 Million in new recruitment grants to bring preeminent cancer researchers to Texas.  I also want to thank Speaker Phelan and his staff for their continued support of Dr. Patel and our mission here at CPRIT.”

Dr. Patel is a pediatric hematologist-oncologist in San Antonio with an extensive record of leadership in the local medical community, including his time as the Medical Board Chair at Methodist Healthcare System and as the Chief of Staff at Methodist Children’s Hospital. While at the National Cancer Institute in Bethesda, Maryland, he was instrumental in developing the division of pediatric neuro-oncology as a principal investigator on numerous phase one/two clinical trials researching brain tumors in pediatric patients.

“I am honored that Speaker Phelan reappointed me to the CPRIT Oversight Committee,” said Dr. Patel, “I look forward to continuing my work, alongside CPRIT and my fellow Oversight Committee members, to make Texas a national and worldwide leader in the fight against cancer.  There is a great deal of exciting cancer research and prevention efforts happening in Texas thanks to CPRIT, and I am proud to do my part to support the vital mission of this unique agency.”

ABOUT THE CANCER PREVENTION AND RESEARCH INSTITUTE OF TEXAS (CPRIT)

CPRIT was created by the Texas Legislature and approved by a statewide vote in 2007 to lead the Lone Star State’s fight against cancer.  In 2019, Texas voters again voted overwhelmingly to continue CPRIT with an additional $3 billion for a total $6 billion investment in cancer research and prevention.

To date, the agency has awarded $2.9 billion in grants to Texas research institutions and organizations through its academic research, prevention and product development research programs. CPRIT has also recruited 253 distinguished researchers, supported the establishment, expansion or relocation of 43 companies to Texas and generated over $7.2 billion in additional public and private investment.