AUSTIN – The Texas State Agency Business Administrators’ Association (TSABAA) has named Wayne Roberts, Chief Executive Officer of the Cancer Prevention & Research Institute of Texas (CPRIT), its Administrator of the Year. The award was presented at the TSABAA Annual Conference in San Antonio.

“Wayne Roberts exemplifies the qualities we look for in state administrators – integrity, sound leadership and proven expertise in public policy,” said Rebecca Trevino, TSABAA President and Chief Financial Officer of the Texas Water Development Board. “Today, we recognize not only Mr. Roberts’ outstanding leadership since he took over the helm at CPRIT, but also his 40-plus years of service to the state of Texas where he has distinguished himself as an example for all administrators in the public sector.”

TSABAA’s Administrator of the Year Award was established to formally recognize state employees who have demonstrated outstanding leadership skills and who have made significant contributions to state agency business administration. In addition, the award is designed to encourage the recipient's development, growth and distinctive leadership. One of the most prestigious of the Association’s awards, the Administrator of the Year Award was first presented in 1984 and continues to be a highlight of the association’s Annual Conference. TSABAA was founded in 1969 to provide a center for discussion and focus on issues affecting the business operations of Texas state government. 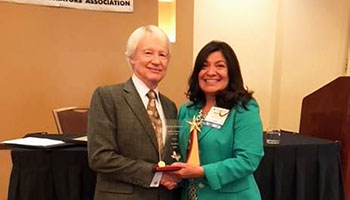 “Wayne's steady hand, extensive knowledge of state government, and well-earned reputation for personal integrity, all built during a lifetime of public service, have been essential for CPRIT to accomplish its mission to alleviate the burden of cancer for Texans and others around the world," said Will Montgomery, CPRIT Oversight Committee Presiding Officer. “His contributions ensure that CPRIT’s legacy will be felt for decades to come. All of us on the Oversight Committee extend our congratulations to Wayne for being duly recognized for a distinguished career in public service."

Wayne Roberts was named Chief Executive Officer of CPRIT in November 2013 after serving since December 2012 as the Interim Executive Director. Prior to four years with The University of Texas Health Science Center at Houston as Associate Vice President for Public Policy, Wayne’s career was weighted towards public finance and budget, especially with respect to higher education. He held numerous senior positions under Governor Rick Perry, and served Governor George W. Bush as Deputy and Acting State Budget Director. He was Lieutenant Governor Bob Bullock’s special assistant for budget and human services following 18 years with the Legislative Budget Board.

Wayne has been awarded life membership in the National Association of State Budget Officers (NASBO) after holding several positions, including president, on their executive committee. In 2009, Governor Perry appointed Wayne to the State Pension Review Board for a term ending in 2015. He received a B.A. with honors and special honors in government from The University of Texas at Austin and a Masters from the Lyndon B. Johnson School of Public Affairs.